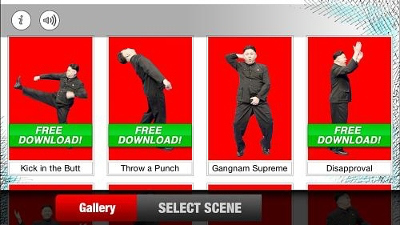 According to PR Newswire

While Sony Pictures may have famously balked at the idea, the fearless development team at Subway Monkey has no qualms about poking the bear that is North Korean dictator Kim Jong-un. The company’s new mobile app, Kim Cam, gives users a co-star with the reclusive and notorious leader in their own mini-movies. Subway Monkey has also launched a Kickstarter campaign to further support the app’s development.

“What’s a great home movie or viral video without a compelling and recognizable star?” asked Bee Brown, Public Relations Manager at Subway Monkey. “Our new Kim Cam app lets enterprising young directors cast none other than Kim Jong-un in the lead role, doing all sorts of ridiculous things. We all know that Kim’s father was an avowed movie buff – it’s only fitting that his son follow in his footsteps, so to speak.”

Kim Cam is free and will launch first on Google Play. The app takes advantage of a smartphone’s built-in camera and enables users to insert short recordings of the North Korean leader into a video clip. The user’s imagination and sense of humor are the only practical limitations on what can be created with Kim Cam.

These apps might not seem a significant contribution to the world, but there are a few inescapable highlights of creating an app like this:

Of course, in the case of a high profile target like Kim Jong-un, there is a risk your satirical app will attract the attention of cyber criminals, like the people who hacked Sony Pictures.

However, the world would be a poorer place, if everyone started censoring themselves because they were worried someone powerful might be offended by what they say. The famous comedian Charlie Chaplain refused to be intimidated by the risk of retribution from Adolf Hitler, when Chaplain made the satirical movie The Great Dictator, even though Hitler had agents and sympathisers who could conceivably have attacked Chaplain in retaliation for mocking their idol.

If you have an idea for a satirical mobile app, especially if the satire is relevant to current world events, and want to speak to an iPhone App Developer or Android App Developer about your idea, please Contact Me.