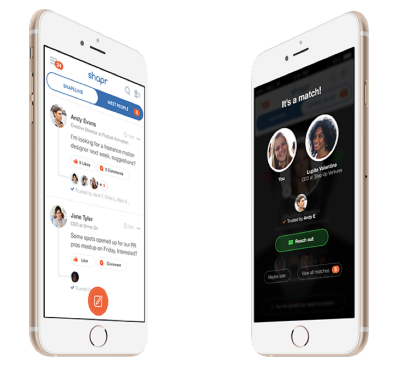 Sharp announces it has raised $3 million of investor finance

New York / Paris based startup Shapr has raised $3 million funding to help them develop a new business networking mobile app. They plan to build both iPhone App and Android app versions of their product.

… the idea for Shapr came to him [Ludovic Huraux] early last year because, as an entrepreneur, he loved to get connected with other people. “I was frustrated because now, [getting connected with others] is very random,” he says. Meanwhile, on LinkedIn, users are often connected to a number of people, some of whom they don’t know that well or haven’t kept up with in years, making it more difficult for online introductions to work as well as those that take place in the real world.

Although Shapr currently bases their service on the LinkedIn social network, Shapr extends LinkedIn functionality, by allowing users to select up to 50 contacts with whom they have a close connection. The idea is to provide an enhanced version of LinkedIn contacts, by encouraging mobile app users to select people with whom they have maintained strong connections, rather than just providing links to everyone in their network, with no qualification based on how up to date that link might be.

Shapr also sees one of their strengths as being mobile centric – designed from the ground up as a mobile app, rather than being retrofitted to iPhone App and Android App platforms after initially being developed as a desktop system.

… unlike business networking giant LinkedIn, Shapr’s software is mobile-first, with apps for both iOS and Android devices that allow users to select a subset of their contacts who they really know and endorse, and then share those contacts with others in their network.

The Shapr announcement is firm evidence that there is ongoing strong investor interest in networking apps. While it might seem sometimes that billion dollar companies like Facebook own the world, the truth is all social networking businesses are one innovation away from losing their crown to an ambitious newcomer.

If you have an idea for a networking app, or would like some help preparing a proposal to attract investor support for your mobile app idea, please contact me now.